For Episode 21 I spoke with someone who’s been an animated head more times than he can probably count: Paul Hanges is CEO of JibJab, which is famous for its personalized e-cards and satire animations that lets your head be the star! If you haven’t heard of JibJab you may have had YOUR head in the sand; they’re the OG of digital branded content. It was born in 1999 to brothers Evan and Gregg Spiridellis, perhaps best recalled from their 2004 glory days of being featured on everything from The Tonight Show to ABC News for then viral political satire, “This Land.”

Hanges, who was promoted from COO 18 months ago, says they’re proud of being dubbed the “original online cockroach” for their longevity and survival of dot-com and economy busts. In our conversation he explains why JibJab is still hot more than 20 years since its inception. They’re even having something of a renaissance with the resurrection of their trademark Year in Review video after a six-year pause. (But how could you NOT do a recap of a year like 2020? For Chief Creative Officer Mauro Gatti and lyricist Scott Emmons it probably almost wrote itself! And I’m proud to offer my big head/floppy jaw cut here for your amusement by way of example!)

Hanges also explains the appeal of low-tech animation and their trademark “big heads and floppy jaws,” how they survive as a subscription model and why they walk away from brand dollars if not aligned with their mission – “to make billions of people happy by allowing them to be funny, wherever they’re having that conversation.”

Here are the highlights – but do hear all Hanges has to say in this very “animated” conversation: 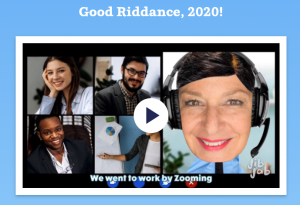 And of course, for the last episode of 2020 we have to offer Hanges’ words of wisdom from the past full year as CEO to other new CEOs…and how to embrace your strengths and those of others as well. “I take a step back and look and say, ‘we have a very strong operating team that’s working towards a goal of making billions of people happy.’ …And I’ve been really proud to say I can lead this company with that mission.”

Personally, I could not have wrapped up my first year of Insider Interviews podcasts (AND my “It’s Quite a Living” personal podcast) with a better message than to “head” into 2021 with the inspiration of a JibJab to find the humor and spread the joy throughout this holiday season and into 2021.

Thank you all for listening and hopefully sharing this podcast. I value your feedback and support. And if I can help you create content that spreads joy or opens revenue doors please visit Moss Appeal or write to me at podcasts@mossappeal.com. 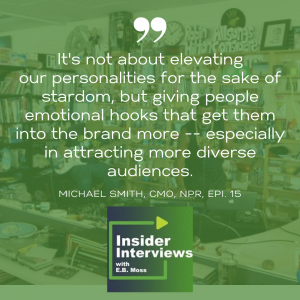 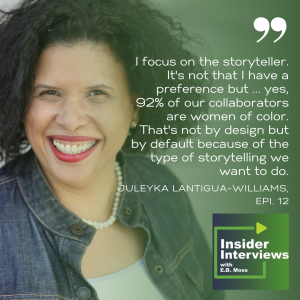 Normally I come out with a new episode of “Insider Interviews” every Thursday, but did you know that I also have another podcast? It’s sort of my personal passion project and it’s called “It’s Quite a Living“, and it’s with “my friends in high places”. They’re really casual conversations about some high profile people who happen to be my friends. Now, that one comes out every other Tuesday.

So I’ve decided to make “Insider Interviews” — the B2B one speaking with those in media marketing and advertising — come out every other Thursday…at least through the summer.

Of course, if an eager sponsor* wants me to produce more frequently bring it on! Otherwise, you’ll hear Episode 11 NEXT Thursday.

Frankly, it’s been a LOT to create, host and post two podcasts a week, even though I love it — especially during our current times, and especially since I seem to be developing a reputation for singing to my guests. Listeners understand that…. But do stay subscribed because you won’t want to miss the CEO of Quigley Simpson, Carl Fremont, who will be my very interesting next guest! 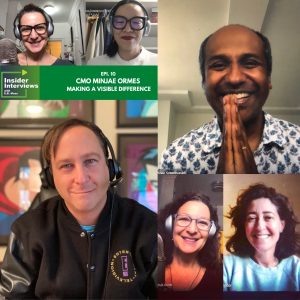 And now you have some time in between to catch up on the past 10 episodes with amazing folks like Minjae Ormes of Visible, Claude Silver of Vayner Media, Sree Sreenivasan (don’t miss his #NYTimesReadalong on Sundays!), Rachael Henke of Dell Technologies, and guests from NYI, Tidal Wave Productions, Krantz Media and more!

I’m very, very proud of what we’ve been able to do together to bring you great content about the industry. And I really appreciate all of the great ratings you’ve given me and the subscribing and sharing. You can listen just about anywhere you like (although Pandora is still a hold out, I’m just sayin’.) Thank you for telling everyone in the industry. It means a lot to me.

*And, if you want to sponsor an episode of EITHER podcast, or suggest a guest for “Insider Interviews”, please reach out at podcasts@mossappeal.com. I’m “hear” for you!