With more media consumption projected during our current crisis — and radio and podcast hosts perceived as companions — I thought it was a fitting time to speak with someone who has spent an entire career in audio – from on-air in college to the C-Suite of major radio networks, to delivering multiplatform content aligned with high wattage personalities:  Gary Krantz, chief executive officer of Krantz Media Group LLC (KMG).

Proof positive? One of the last times I hung out with Gary was alongside classic rock legends like Alice Cooper, Jimmy Page and Brian May, in London. But I digress….

Krantz has taken entertainment companies and brands from conventional broadcast to digital business models and helped fuel the radio careers of such notables as Carson Daly, Ryan Seacrest and Rachel Maddow. In a conversation for Insider Interviews podcast, he explains how he leveraged his stick-to-itiveness to go from unpaid “gopher” to ultimately help run MJI Broadcasting (later acquired by iHeartMedia, where he became executive vice president of their Premiere division), on to president of Air America to chief digital media officer at Westwood One. We learn how his gut instincts led him to syndicate some of the biggest names and events on air and ultimately adding to the utopian landscape of podcasting, with the launch of half a dozen new podcasts, some in conjunction once again with iHeart, including The Fred Minnick Show and Politicon, hosted by Clay Aikens.

You’ll want to listen to the whole conversation to get the inside scoop on radio from the 70s to today, and making moves in podcasting and syndication.

Here are the pictures, as promised in the episode!

These days, every video provider is looking to land ad dollars with a one-two punch of broad but targeted reach for brand awareness, matched with proof of performance — or business outcomes — via addressability or attribution. A+E Networks calls the combo “Precision + Performance.” In this bonus episode of Insider Interviews I thought it was important to get some terminology down for future episodes dealing with the business of television today. So, Ethan Heftman, senior vice president of Precision + Performance took me through the group’s approach to me and also discussed A+E’s first-to-market guarantees to advertisers of some select business outcomes. (The following overview of the conversation has been edited for clarity and brevity.)

I asked Heftman for specifics, starting with the way A+E defines attribution. “For us, it’s … tying a media exposure on A+E Networks to a specific business outcome,” he explained. “It’s going beyond simply the discussion of what type of media metric we delivered [like an “impression”] to what type of action or behavior that impression caused. For example, is it fueling a behavior at the top of the funnel — the awareness area — or the middle, the consideration area. Or, is it impacting the bottom of the funnel, a sale or specific outcome type?”

A+E markets its Precision + Performance product as impacting outcomes in each of those three areas, versus just the expected top-of-funnel. Historically, “television hasn’t been properly credited with outcomes in the real action area: driving a web visit, driving a store visit, driving a specific sale,” Heftman said.

Next, Heftman explained A+E’s view of precision and performance. “Precision is our advanced audience targeting tools; that is, through the use of advanced data sets — whether it’s MRI, set-top-box data from an MVPD…, Axiom or Polk data, or first-party data that an advertiser provides us,” he explained. “Performance are the tools that we use to discuss, find, and prove specific outcomes within that purchase funnel. The better job you do of identifying and finding those discreet audience segments, the better job you do of picking dayparts and programs that deliver against them, the better outcomes you will have.”

Sort of like this: If I’m watching Married at First Sight on their Lifetime network — and I’m not saying I do…well maybe I do — A+E is willing to guarantee to the national retailer that advertises in that show and other Lifetime or A+E programming, that by precisely targeting people like me with some fancy data they can show that people like me went into that store or visited the retailer’s site (performance). Guaranteed.

You really should listen to the entire episode for Heftman’s explanations and insights. He also shared the categories that perform well and which platforms A+E can precision target (hint: all) and measure performance across (ditto!): “We’ve always been able to talk about performance outcomes in the digital space, in the OTT space. We believe that the real game-changer is being able to have that conversation in the linear space and then marry that with the existing conversation in digital and over the top.”

A version of this bonus episode of Insider Interviews with E.B. Moss originally posted on MediaVillage 3/5/20. 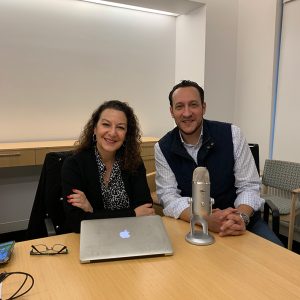 I’m a radio brat. We hijacked the common military slang for those who moved around a lot. In our case it was my Dad getting hired and the next bigger radio market…and the next bigger radio market. So, being “raised in radio” explains a little about the origins of this podcast – interviewing those in the media, marketing, advertising and entertainment industry. Because after following in my dad’s footsteps to a radio career, I also found my own footing in television, publishing…and, yup, digital audio.

But just for backstory, my fledgling radio career in local New Jersey stations DID lead to a decent career in doing voiceovers in San Francisco…and even landing the same agent as Casey Kasem in Hollywood! But that’s where it stopped…until I went behind the scenes, marketing radio, then television at E!, Lifetime and Food networks…and guess what? Then audio companies, too, like Westwood One and AdLarge.

That led me I began writing about the media and marketing industry …and then as Managing Editor/Head of Content Strategy for Jack Myers’ MediaVillage most recently I began interviewing everyone from agency leaders like Sir Martin Sorrell and brand experts like Bozoma Saint John; from the chief marketing officers of SAP to Sam’s Club, the NFL to Hershey’s….

All of this has helped me gain a pretty good understanding of not just how to speak with executives in almost any area, but to really recognize that today, companies all have to be able to embrace audio AND television AND print AND social media to get their business message out there. So that’s what I’ll doing: using audio, and some long form show notes with lots of links to help you navigate information and interesting stories from thought leaders in all areas of the industry… with a little insight on who they are personally… and hopefully a little fun along the way.

And all I ask is that I you listen to this all new Insider Interviews podcast, with me, E.B. Moss, and subscribe, share and, most of all enjoy!