In interviewing the Radio Ad Bureau’s CEO, Erica Farber, my worlds collided: it’s a podcast, but about radio, the medium I grew up in and started my career in. Certainly radio IS about community, but it was still surprising to discover zero degrees of separation with Erica and two important people from my past: my dad and my first female boss, Joan Gerberding as well as a recent Insider Interviews guest and radio aficionado, Carl Fremont!

Erica and I took the conversation from the evolution of radio to the present, to how it’s defined today – audio? is digital radio still radio? – to its challenges, success stories, and current career opportunities.

It’s broadcasting, but Radio is also available on any platform: If you want to hear it on your smart speaker…If you’re sitting in front of your computer or in your automobile. It’s multi-platform and available in any form and full of diverse content. It is a companion. It is a trusted source of information, news and entertainment. It’s available 24 seven. And there’s no cost to access it.

I’ve never been so proud to say I work in radio as I have since March 2020. No one knew what to do…But radio rose to the occasion and stations did what they do best: they put their arms around their communities, consoled listeners and brought some humor and information. …They said to businesses that were open, ‘let us help you communicate to the market your protocols’. How can we raise money to feed or clothe people, to help people keep their homes? We have example after example of retailers who said that if it wasn’t for local radio they would have lost their business.

And yes, host E.B. Moss finds a way to sing in yet another episode….

Joakim (Kim) Wijkstrom, SVP / CMO of Vanda Pharmaceuticals, has learned to “Think Different” and have “Lending Done Human.” He has sent little, teeny Absolut bottle-shaped Christmas sweaters to readers of the New York Times, and leveraged Andy Warhol style pop op to promote schizophrenia drugs. A Swede who grew up in West Africa, Kim also opened the Latin America markets for two TBWA\Chiat\Day clients. If that sounds like the start of a good story, then that’s the point.

Because for this marketer it always starts with the story, not the silver bullets.

Kim has developed a “cultural curiosity” from both moving around and a liberal arts degree, which has been a big asset in his marketing career: “I think advertising lends itself naturally to someone who is interested in how we shape and creatively express our worldview, how we understand the things around us, how perceptions are shaped. So, I think it made sense for me to land there. But as it turns out, I’m half a humanist, half of something more analytical. Perhaps I was never going to be the next Leonardo…[but] you figure out the way to take whatever you’re equipped with and put it to use where it is best applied.”

This attitude is also encompassed in his top performing article in The Continuum, the publication I edit about “brand and demand” marketing. In that, and in this follow-up conversation about the origins of his branding philosophy, Kim sticks with the story that brand always must start with the story! The delivery tactics — what he has called the silver bullets – are secondary.

But when you’re talking to a storyteller you cover a lot of ground. We also discuss:

But wait, as they say, there’s MORE!…

Kim also explains the story of Vanda, and his move from marketing men’s suits (Perry Ellis) or financial services (One Main Financial) to pharma. He gives an example of how the same story (for a particular drug) can be extended into different spaces, like digital to video without having to be, well, prescriptive! (And, yes, we discuss the challenge of pharmaceutical advertising and FDA constrictions. But check out their innovative approach to Fanapt for insider insights on  how it can still be impactful.) And I finally got to understand what’s behind drug NAMING!

So, how did Kim finesse his own “brand story” – or POV about storytelling? Well, that starts with a guy named Steve Jobs.

“I was really lucky I got to work on Apple when it came back to TBWA\Chiat\Day … and that was the launch of the now-iconic Apple campaign “Think Different.” I was a junior person then, so I’m not claiming any credit for the campaign…but what was amazing was encountering Steve Jobs and seeing the process by which that campaign came about. That was a ton of learnings about what actually really matters. He couldn’t give a crap about ROI or metrics, frankly. …if people react to it, that’s what matters’. And Apple sells a lot of product. So, it’s not like the brand doesn’t work in selling or performance.”

Kim shares the three-point “a-ha” takeaways he got from Jobs. And that, my friends, is how you do a cliffhanger. 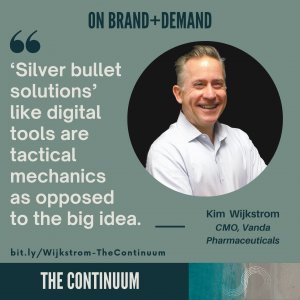 So, I hope you’ll listen to the full conversation with Kim Wijkstrom. And if his learnings from Apple aren’t enough, wait til you hear what he says marketing an odorless, tasteless product: vodka. Or, how an MRI machine proves out his belief that the brand is what drives ROI.

Okay, okay, I’ll also share that he says when you DO add in those tactics for delivering the brand story, he’s still a believer in different forms of direct marketing.

… [But] to me, the point of a brand in the mix is it’s going to amplify your ability to get pull through on those tactical pieces. Because if people receive something in the mail, whether email or online, it’s really easy, of course, to dismiss it and throw it out. If you have a brand, it’s not as easy. They may actually open it. So, it basically primes demand. That’s what a brand does.”

I hope you’ll get some good insider scoop from this episode of Insider Interviews with me, E. B. Moss, and I hope you’ll follow Insider Interviews on Twitter, Facebook, Instagram. And let me know if you have a question or suggestion for our next guest. My theme music was composed and performed by the incomparable and Grammy-winning John Clayton.

Thanks again for listening.

Thanks to Los Angeles-based agency RPA, “We Are Farmers, buh bi dum dum dum dum dum” has become a bit of a jingle earworm. Great awareness and brand recognition for the insurance company. Joe Baratelli, EVP and Chief Creative Officer of the agency that’s been his home for almost 35 years, walked me through that and other creative concepts and their business results. It starts, he suggests, with the mantra of the organization: People, Relationships and Results.

(Note: You can also read a summary of this conversation in the new publication, The Continuum.)

Now, in an era of ubiquitous focus on health, though, the AOR of Farmers and Honda wants to expand its portfolio to include more healthcare clientele. Joe also explained how RPA has started to accomplish that — and did well by doing good for UNICEF and the Pediatric Brain Tumor Foundation. It’s heartwarming work and their pillars of focusing on people and relationships definitely shine through.

If you’re in advertising or #marketing, this is one to save as a download.
Joe and I talk about:

Oh, and yes, I managed to sing the Farmers jingle. 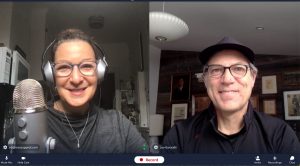 Arra Yerganian thinks healthcare has always been a little upside down, controlled by physicians instead of the the patients. Ya think? But I misspeak – at least while speaking with Yerganian:  he actually banned the word “patients” when he was CMO at both Sutter Health and One Medical. He explained that the word comes from Latin for “‘a place of suffering’ and that should be a temporary state at best.” Instead, he said, “We used the person’s name, so it wasn’t a dehumanizing experience to come into the doctor’s office.”

I liked this guy immediately. But there’s more to marketing healthcare than nomenclature. Yerganian is on a mission to raise awareness of the biggest issues impacting health for all of us: our Social Determinants of Health — or SDOH. Basically, if my zip code is wealthier than yours the overall population is likely healthier. I likely am more informed about and have better access to healthier foods or fitness facilities, I might have access to more parks for fresh air, and of course the income to afford anything from childcare to catch up on sleep and even infant mortality rates and so on. So how can we democratize health? For Yerganian, it’s awareness, it’s education, it’s communication. He also notes that, apropos our recent civic dis-ease and disease, “beyond the pandemic, the great challenge that we’ll have is the behavioral health crisis that’s affecting our country.”

He shares the details of best practices and how to get on a healthier collective path overall in this Episode 22 of Insider Interviews. (Hint: stand up more for healthy behavior in every sense of the meaning.)

NOTE: I’m proud to be Editor in Chief of The Continuum, about awareness and performance marketing. In Issue 2 posting in late January you can also read this interview along with the POVs and suggestions from other notables in the health and wellness marketing space.  But, dear listeners, you get the advance insights here when you catch the full conversation with Arra Yerganian.

He and I discuss:

Here’s to a happier, HEALTHIER New Year to you all, with my sincere appreciation for listening, sharing and subscribing wherever you like to listen to Podcasts.

Those tracking the uptake of podcasting, such as Triton, Edison Research and Podtrac, have encouraged advertisers to embrace the medium, especially since it hit critical mass of 100 million+ monthly listeners! But what about brands who want their OWN podcast for B2B purposes?

In 15 minutes I’ll walk you through the WHY and the HOW of creating a B2B podcast for your company. And if you’re still overwhelmed let me know and we’ll handle it all for you! Here’s the scoop and the Episode 5 topline:

Why a B2B podcast?

And again, I’m here to help. If you’re in the media/marketing world with a senior executive who is guest-worthy please drop me a line or reach out on social media! If you want help creating your own podcast from scratch, happy to exec produce or host! LMK!